Since its creation in 1985, Consorcio Regional de Transportes de Madrid (CRTM), the Public Transport Authority for the Madrid Greater region, has considered the integration of the different modes of public transport to be a high-priority objective in its operations, among others :

planning of infrastructures and services ;

pricing framework and multi-trip tickets ; and

image of, and information relating to, the public transport system.

Multi-modal transport interchanges are the best example of the integration of the various public transport networks and, since its beginnings, Consorcio Regional de Transportes de Madrid has constructed various peripheral interchanges, located in the intersection between the border of the city centre and its six main radial corridors. The idea is to facilitate at these points the transfers between intercity buses and urban modes (metro and municipal buses) to achieve a seamless journey.

The first generation of interchanges consisted of surface improvements as Aluche, Plaza de Castilla (A-1 and M-607 corridors) or Conde de Casal (A-3 corridor).

With the second generation, bus stations have been constructed underground, due to a lack of surface space, as for Moncloa (A-6 corridor).

In the third generation, the concept of multimodal interchange took its whole dimension by intergrating metro station, underground bus station with dedicated tunnel access from the streets for public transport that allows huge time savings. The best example is Avenida de América (A-2 corridor) oponed in 2000.

Using the experience gained from these interchanges, via an agreement in 2004 between Madrid City Council, Madrid Regional Government and Consorcio Regional de Transportes de Madrid itself, CRTM drafted the specifications to place out to public tender the construction works, maintenance and operation of six new large transport interchanges (see map for location) all included within the 2004-2007 Interchanges Plan.

Four of these large intermodal centres (Plaza Elíptica, Príncipe Pío, Moncloa extension and Plaza de Castilla) are already under construction with quality and safety requirements regulated through the Operation and Maintenance Programme, suitably incorporated in the concession contracts.

In order to achieve the fulfilment of the Operation and Maintenance Programme objectives to provide a high-quality service (interchange building and access management, facilities and equipment supervision and control, traffic management, safetysecurity issues,…) to the end-user, CRTM and the 4 Concessionaires are implementing a common Integrated Management System to monitor in real time all the new interchanges. 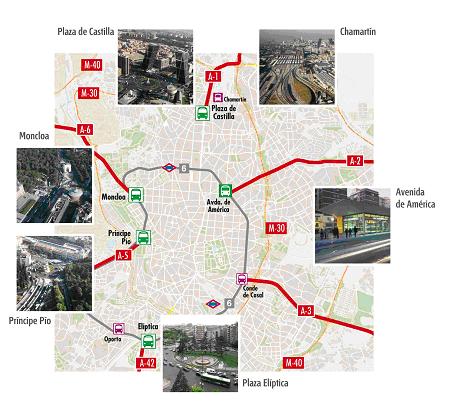