SYTRAL, the Transit Authority of Rhone County and the Lyon Urban Area, governs the urban transport networks operated under the names TCL and Optibus. SYTRAL is responsible for transport in the Urban Transport Zone, or PTU, which includes the 65 cities and 1.3 million inhabitants.

SYTRAL, which was created in 1985, is a local public administration authority. It is made up of 85 officers, who prepare and implement the decisions of the Supervisory Board, made up of 26 elected members. 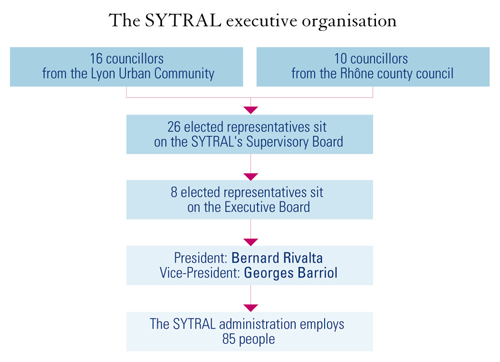 16 elected members of the Lyon Urban Community, including the President of SYTRAL;

10 elected members of the Rhone county authority, including the Vice-President of SYTRAL.

The Supervisory Board constitutes SYTRAL’s executive body. Votes are taken on strategic decisions during sessions that are held every six weeks on average.

five elected members, including the President;

three members of the county council, including the Vice- President.

The bureau’s role is to define and prepare the decisions, which are then put to a vote by the members of the Supervisory Board.

Operational teams :91 employees work for SYTRAL, including both public sector employees and contractors. The cabinet, the safety counsellor and the communications department report directly to the President’s office. Four divisions report to the general management:

The role of the divisions is to prepare and implement the decisions of the Supervisory Board.