The West Midlands is made up of seven Local Authority areas with a total population of 2.56 million inhabitants. These Local Authorities are: Birmingham, Coventry, Dudley, Sandwell, Solihull, Walsall and Wolverhampton. Birmingham is the largest of the Local Authority areas and is the second largest city in the United Kingdom. The West Midlands is predominantly a urban region with a diverse ethnic and cultural make up. It is traditionally famous for its car manufacturing industries but the last decade has seen an increase in the service and hospitality sectors as new investment has been made. Millions of pounds have been invested in recent years, in particular the new developments in Birmingham city centre which acts as a vibrant, cultural centre for the region. Map showing the Metropolitan Area within the country 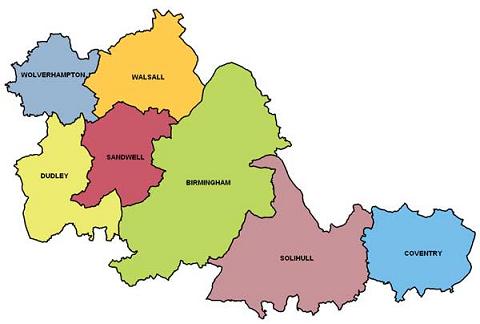 Map of the Metropolitan area