Unlimited travel in Germany for 9€ per month: a good idea? 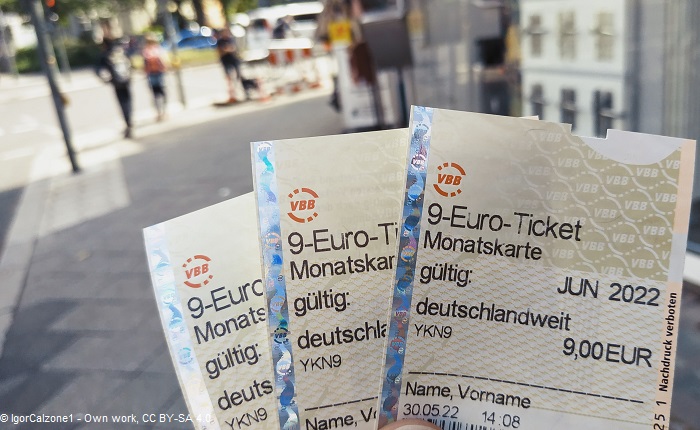 Among other measures to deal with high energy costs, the German federal government introduced a heavily discounted, special monthly pass for public transport available in June, July and August 2022. For 9 Euros per calendar month, the so-called 9-Euro-Ticket permits unlimited use of bus, tram, metro, metropolitan- and regional-rail services in second class throughout the country. The pass is not valid in long-distance and high-speed train services or coach lines.

Any existing public transport subscription valid in any German territory during the three-month period (monthly pass, annual pass, student pass; valid in one city or an entire region, etc.) will automatically become valid nationwide with the subscription holder receiving an automatic refund for the price difference between the 9-Euro-Ticket and the original subscription cost.

With this scheme, the government seeks to reinstate some cohesion in its energy cost mitigation package: With drivers benefiting from a temporary reduction of fuel duties (about 29 cents per litre gasoline and 14 cents per litre Diesel), citizens using public transport – and hence already travelling sustainably – are to experience such support as well, to somewhat compensate for this subsidization of fossil fuels.

The scheme offers a cheap and simple way to test public transport in one’s region and beyond. The common excuses of complicated fare structures and seemingly expensive fares are simply rendered invalid in the coming months.

The scheme is also described as nationwide test of price-sensitivity and passenger growth potential. The scientific evaluation of the scheme bases on several rounds of market research representative of the total population, not only of customers. The results are to feed into the public transport strategy of the federal government, that has the objective to double public transport use by 2030.

Recent polls suggest that some 55% of the German population intend to use the pass, with pre-sale figures described as historically unprecedented. The effects on public transport use may be rather diffuse and are difficult to forecast. Research generally suggests that price sensitivity in public transport is low. Mode shift is rather driven by service level.

Will the scheme – together with high fuel prices – succeed in inducing a durable mode shift? The simultaneous discount on fuel duty may actually reduce such potential. The 9-Euro-Ticket may therefore rather induce new transport demand, such as leisure trips. Will the public transport system cope with the extra demand? About 20% below pre-pandemic level, patronage currently has room to grow. Yet crowding is feared on services to touristic destinations like the coasts and the Alps. Transport authorities and their contracted operators intend to offer additional capacity wherever possible but face harsh limits regarding rolling stock and personnel availability.

The additional workloads public transport authorities and operators will have to deal with in the coming weeks are immense. Nevertheless, many different segments of the somewhat car-oriented German society currently debate public transport matters. Newspapers, influencers and TV programs provide suggestions for the best routes throughout the nation, potentially reaching a completely new audience. With the direct, transport-related effects of the 9-Euro-Ticket unclear, what is certain is the great exposure and awareness it has already created for public transport.