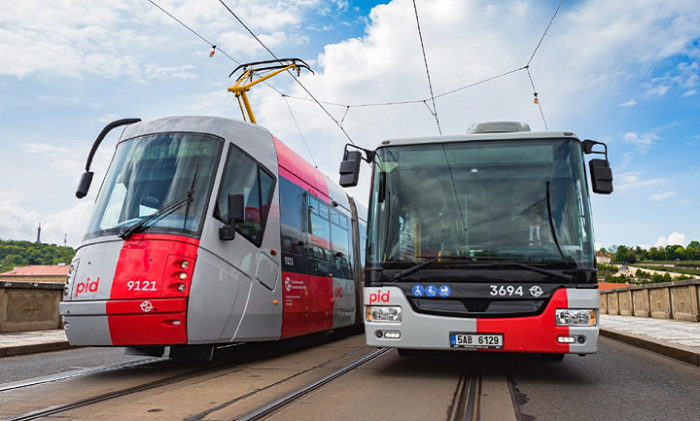 The Integrated Transport System, which covers all public transport in Prague and the Central Bohemian region, servicing 3 million people on more than 600 lines with 5 000 vehicles operated by 35 carriers, is getting a new unified look. The logo is changing together with additional graphical elements, including a new uniform design for all vehicles. The approved design came from a 2019 competition in which a jury composed of independent experts and representatives of the city of Prague and the Central Bohemian region selected the proposal submitted by the superlative.works studio. All newly ordered vehicles will be purchased in a combination of red and light grey in vertical stripes.

The aim of the new unified design for the PID was to present the public transport service as a modern, but more importantly easily readable and consistent 21st century system, as well as to make orientation easier and ensure that passengers can always find all the information they need intuitively in the same or similar places regardless of the mode of transport or carrier. Because the PID system is currently being extended throughout the entire Central Bohemian region, it needs a new modern look that would correspond with its full coverage of public transport in the city of Prague and the region, to ensure that users can tell at a glance that their PID ticket will be valid in the given vehicle. Until now, there were two different graphical manuals for bus lines in Prague and in the Central Bohemian region. Trains, trams and metro cars had no unified design at all.

The new design was also developed with wheelchair users and parents with prams in mind. Navigation will be much more user-friendly and easier to read. Today people have to pay attention to small stickers by the side of the door that are no longer visible once the door opens. Instead, the new style uses clear and distinctive guidance that is impossible to miss.

From 2022, the new graphical manual will be a binding annex to the PID quality standards which apply to all PID carriers in Prague and the Central Bohemian region, including bus carriers selected in the upcoming 2024 tender. Ultimately, the PID system will include about 700 metro cars, 900 trams, 350 trains and 3 000 buses; it should also include Prague trolleybuses for which a major comeback is being planned.

Details on the new PID logo and vehicle designs The new look utilises the colour red as the connecting link between Prague and the Central Bohemian region because it is the traditional colour of the iconic T3 tram (the new design is actually using the same shade of red as the T3). Red and white are also the colours of the Prague logo; red is prominently featured also in the logo of the Central Bohemian region. Red is combined with light grey to unify the current patchwork system in which every vehicle looks slightly different. The current system uses at least 12 different shades of colour (not counting trains where there are even more than that); the new solution expects to use only 3 colours everywhere (including trains).

The most striking feature of the new visual style are red vertical stripes. These will improve safety, visibility at a distance and orientation when boarding, as they usually mark where the doors are located. These colours will also make public transport in Prague and the Central Bohemian region unmistakeable from other neighbouring systems. The selected shade of grey will also improve the perceived cleanliness of the vehicles, because the currently used white becomes dirty very quickly in normal traffic. A more prominent use of the PID logo will increase awareness of the unified system for all modes of transport.