The funding of the AML initiatives is mainly supported by the municipalities, but in the case of the new fare systems, the funding is based on a national programme that promotes public transport and is also supported by the national environmental fund.

Since April 1st of 2019, the Navegante replaced a complex tariff system comprised by a plethora of more than 4.000 different PT titles, difficult to understand and overpriced, with just two main monthly passes: i) one single pass for all metropolitan territory costing 40€ (Navegante Metropolitano); and ii) one municipal pass of 30€ for each of 18 municipalities of AML (Navegante Municipal). In addition, a set of reductions and discounts for specific groups such as children under 12 years old (0€), seniors plus 65 years old (20€) and families with residence at AML (80€/60€) were also established.

This new tariff system allowed to address the inequalities over the territory and among the operators and services demonstrated by an increase on the demand in terms of both passes and ridership. Compared with the same period of 2018, since April there was an increase of 25% on the passes sales until November 2019, with the Navegante Metropolitano being the top seller pass representing 60% of the sales in all the metropolitan area. In terms of ridership, the increase was of 17% and was accompanied by higher loyalty rates with an increase in the number of regular passengers (+31%) over occasional passengers (-23%) and a more significant use of trains (+31%), followed by buses (+17%), metro (+12%) and ferries (7%). 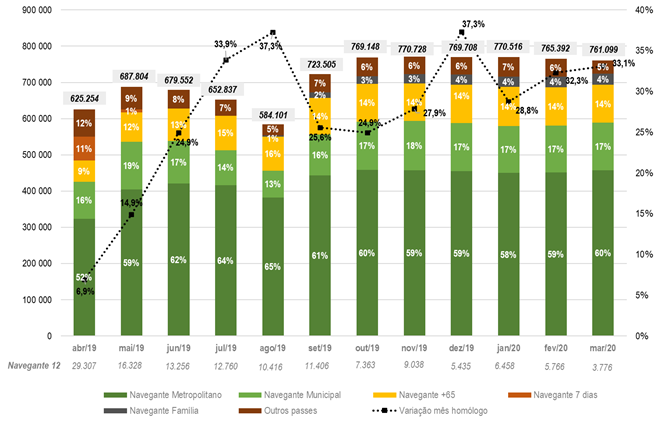