Tickets exclusive of each operator, and valid for its network.

Intermodal cards integrated tickets valid on urban and suburban transport The prices are based on a crown structure.

Combined fares, valid on the Lisbon underground network and on other transport operator. The prices are calculated on a crown structure or on a mileage system. 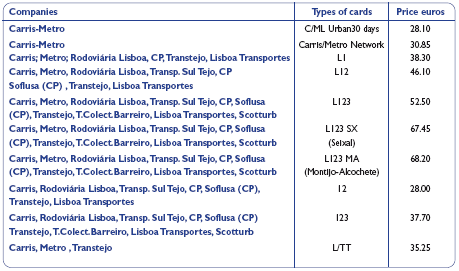 With the conclusion of these undertakings the Lisbon Metro will explore, with compositions of 6 carriages (maximum configuration), a network with around 40 Km of double road and 52 stations (which 6 are pairs) divided in 4 lines.


The government has recently announced that the new airport of Lisbon is going to be built in the old Campo de Tiro de Alcochete (that belonged to the Portuguese Air Force), from 50Km of Lisbon. The construction of the new airport should extend itself until 2017, foreseen date to be entirely operational, being able to start sooner due to the flexibility of the model of construction.In parallel, is foreseen a significant improvement in the regional accessibilities, namely with the construction of one more road and rail crossing that will link Chelas-Barreiro that is going to serve as support to the crossing of the High-Speed Train, that will have as priority line the connection Lisbon -Madrid. In this moment they elapse other works of smaller dimension, as the closing of the main circulars of Lisbon city that contributed of decisive form to the improvement in accessibility not only in Lisbon city as also the all region.