Copenhagen’s new circle line metro – Cityringen – will open this summer with 17 new stops through some of Copenhagen’s most densely populated areas. The new metro line is a massive improvement to the public transportation system in the Copenhagen area as a whole. However, as the metro will service highly dense areas, it will also run parallel to some of the currently most intensively used bus lines.

Movia is involved in the realization of Cityringen by introducing a new metro-adapted bus network together with the affected municipalities and regions. The new bus network – Nyt Bynet – means re-routing 33 bus lines out of 65 in order to service the many new metro stations and stops, and a total decrease of service hours above 10 pct. in the City of Copenhagen. In total, Nyt Bynet affects 12 municipalities and the Capital Region.

In the spring of 2018, all affected local authorities unanimously agreed on the new bus network. Prior to this was a larger public and political process in the most effected municipalities. An immense amount of work by the municipalities, the region and Movia laid the grounds for that decision, and the initial planning began already in 2014. Both in regards to the design of the new bus network, but also the political process, as it was crucial to reach the unanimous decision at an early stage, in order for Movia to implement the change in service-levels in the pending contracts with the various affected private bus operators.

A unanimously political agreement in a conference hosted by Movia in April 2016 proved a major factor in a successful launch. Support came from all mayors of municipalities and the chairman of the regional council. Stakeholders agreed on common budget constraints and service principles for the new bus network. At the same time the conference provided Movia with political mandate to design the new bus network based on pre-approved goals.

To circumvent the risk of a change in the responsible politicians, Movia designed the political process in such a way that municipalities made their final decision after the local elections in November 2017. However, due to the scale of the project, this meant splitting the decision in two. The municipalities and the Capital Region approved the new “strategic bus lines” in September 2016, which consists of the major and most passenger-dense bus lines.

The initial approval of the strategic bus lines paved the way for the approval of the local bus lines, which in many cases required delicate handling. They will run more infrequent but ensure accessibility to public transport on a wider scale. As such, Movia and the operators could sign all adapted contracts on time and without any penalty payments despite the considerable reduction in service hours, and Movia could begin the preparations for implementation.

Nyt Bynet covers an area that services around 100 million passengers yearly with 95% of the citizens in this area still residing within 400 mtr of a public transport stop. Many of these passengers will need to adopt new travel habits and create a new “mental map” of the total transport network, as Nyt Bynet will introduce not only new bus- and metro lines but also new transport hubs. Preliminary travel estimations for Zealand show a yearly increase of 8 million trips, that involve more than one mode of public transportation.

Movia is well aware of the importance of early communication to enable passengers to have time to get used to new journey patterns. Thus, we launched the first phase of a our information campaign in summer of 2018 on both printed and digital platforms.

Movia also focuses on helping and enabling passengers to navigate and get an overview of the new network. Among other things we introduced an early-version of our national journey planner. It enables our passengers to search for their preferred daily journeys and get acquinted with their new trajectories 5-6 months prior to implementation. And also to check whether their journey time will shorten or not. The interest has so far been huge.

The final and largest phase of the information efforts will be launched 2-3 months prior to the opening date with a comprehensive information campaign using both digital and printed platforms, accumulating both over all messages and local campaigns in collaboration with the municipalities and the Capital Region. 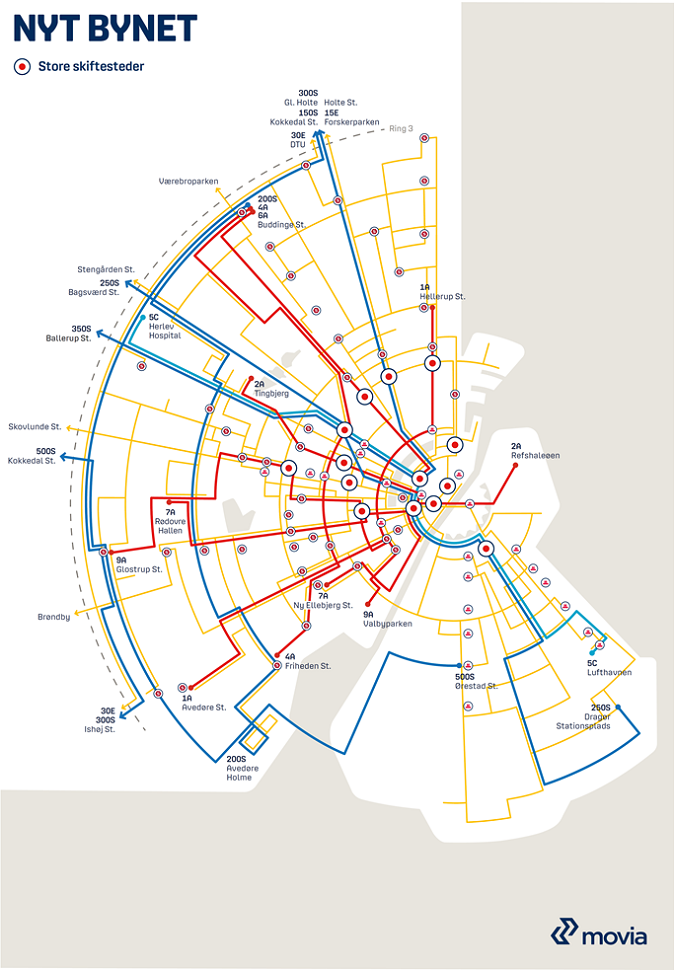