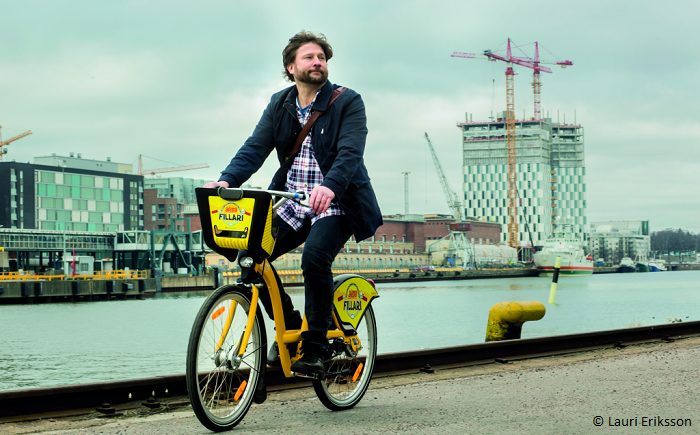 During the past summer and autumn, more than three million journeys were made by the city bikes in Helsinki and Espoo.

During the last season, which ended at the end of October, city bikers set new records. On the busiest days, each city bike was used for 14-16 journeys on average in Helsinki. Approximately nine journeys were made per bike every day in Helsinki, and approximately three journeys per bike in Espoo. In total, the city bikes were used to pedal over three million journeys.

In Helsinki, the utilization rate is high in comparison to other cities worldwide, with approximately 10 journeys per bike every day. In other parts of the world, each bike is usually used for approximately four journeys per day. According to HSL’s Senior Advisor Tarja Jääskeläinen, one of the reasons for the popularity of the city bikes is that they are so easy to use.

“You can get around quickly on a city bike ; it is easy to pick up and drop off spontaneously. The bike service is part of the public transport system, and the bikes are located close to where people live and work. The good weather we had this summer also encouraged people to cycle,” Jääskeläinen says. The city bikes are also an easy mode of transport for tourists, but they are particularly aimed at the local residents.

“The city bike has become part of the local identity. Traveling by city bike is convenient, and it is also good for your health and the environment,” Jääskeläinen says.

The users of the city bikes are fairly satisfied with the service. In a user survey, the service was rated 3.8 on a scale of 1 to 5, where 1 was bad and 5 was excellent. The question on how reasonable the fees are received the highest score of 4.4. The poorest score, 3.0, was given to bike availability and buying a pass on the payment terminal at a bike station. This year 7,935 people responded to the survey.

The city bikes have particularly replaced journeys made by foot, tram and bus, but up to 17% state that they have also replaced car journeys with city bikes. About 69% of city bikers say that the service has saved them time, 11–20 minutes per week for the majority. We are monitoring how the city bike service is functioning and developing it through statistics, feedback from customers and customer surveys. The service is expanding in Helsinki, and was already extended in Espoo this year Next year, the city bike service will be extended to East and North Helsinki. Helsinki City Transport (HKL) studied the local residents’ wishes and needs regarding the location of bike stations through a map survey. Over 8,000 people took part.

“In the north, the area extends to Pitäjänmäki and Oulunkylä to the south of Ring Road I. In the east, the stations will be located near the Metro line so that the most easterly station is in Vartiokylä,” explains HKL’s Project Manager Samuli Mäkinen.

The city will get 88 new stations and 880 new bikes. The exact locations of city bike stations in 2019 will be published at the turn of the year. The extension of the network will enable the service to better cater to large numbers of users also in central Helsinki when the number of bikes in the entire network grows and the station capacity will be increased within the existing network.

In Espoo, the service will continue at its current size.

“According to the wishes of the local residents, we extended the service at the beginning of August from South Espoo to Leppävaara,” explains Johanna Nyberg, Head of Traffic Management in Espoo.

“People in Espoo use city bikes both for independent journeys and to access public transport. Regional journeys between Espoo and Helsinki are mostly made from Otaniemi and Keilaniemi,” Nyberg says.

The next city bike season will start in Helsinki and Espoo on 1 April 2019. Like in previous seasons, registration will be opened a few weeks earlier. In Helsinki, the new stations that are part of the extension of the service will be available in early May.