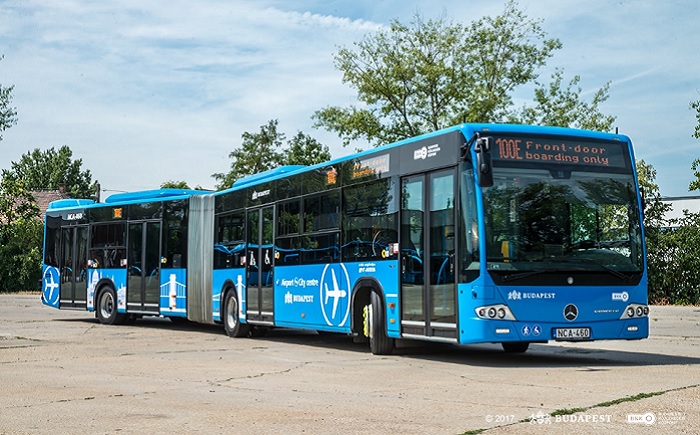 Budapest Airport with its two adjacent terminals (2A and 2B) is partially located on the territory of Budapest, some 20 km from the city centre. Besides air-passenger facilities, logistics and flight related businesses continue to settle in the area. Terminal 2 has no fixed-rail connection to the city centre, while bus line 200E has linked the airport to the nearest metro station, the terminus at Kőbánya-Kispest, providing local transport along the route carrying passengers to the metro.

In response to the increasing travel demand, a direct shuttle bus service was launched on 8 July 2017 by BKK Centre for Budapest Transport in addition to the existing travel options to the airport at peak periods. Service on the new 100E shuttle line is provided by one of BKK’s private operator companies, VT-Arriva Kft, and operates with low-floor, air-conditioned Mercedes Conecto G type, articulated buses, equipped with Euro-6 engines.

The vehicles feature unique livery to differentiate them from the rest of the fleet. Special fares apply on the shuttle bus. The front-door boarding policy is put in place. Shuttle tickets are purchasable in advance at public transport service centres, ticket vending machines and ticket offices. BKK also provides on-site staff for ticket sales, inspection and passenger information at the stops during the busiest periods.

Based on experience following the launch of the service, BKK has focused on advance ticket sales on this line as well in order to expedite the boarding process at the terminuses. Accordingly, the number of sales points have been extended at the airport : two additional TVMs have been installed next to the existing two at the boarding point of the 100E service to encourage advance purchase. In the initial period, foreign-language speaking attendants assisted customers in using the TVMs, furthermore, the menu of the TVMs has been modified so the airport shuttle ticket is displayed on the start screen.

The popularity of the service and the further growth in airport passenger numbers required additional improvements. The next milestone was reached in May 2018, when the service was adjusted in line with early morning and late night flights to run more frequently (every 20 minutes instead of previous 30 minutes headway), and during longer operating hours (between 3:40 and 1:20 instead of the former 4:00-23:30 window). During the busiest times, BKK launches supplementary departures as well.

Considering the success of the developments, BKK reviewed night transport to the airport and as a result, bus 200E started as a round-the-clock service on 16 June 2018. After the shutdown of the daily operation of metro line M3, bus 200E runs between the airport and, instead of the metro terminus, the Határ út metro station which offers transfer connections to other night buses serving the city centre. 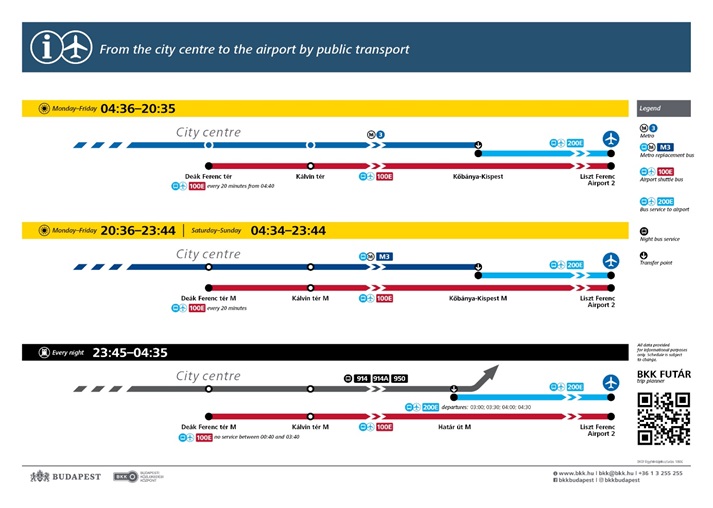 Bus line 100E currently provides direct access to the airport and to the city for about 4,500-5,000 passengers. Given the fact that travel demand at the airport is constantly increasing, BKK is considering further options for the improvement of travel services to the airport.