An air conditioner, low-floor, enough space for baby carriages and also a maximum of comfortable seats, a modern information and fare control system, a uniform appearance. These are only some of new requirements for newly acquired buses for years 2020-2029 that move as a part of a system of Prague integrated transport, which covers Prague and a part of Central Bohemia and within two years it should cover an area with 3 million of inhabitants in the central part of the Czech Republic.

Currently 19 bus carriers in total, from the greatest city carrier (Prague public transport company) with more than one thousand of buses, over medium private carriers to small carriers with only several buses, are involved in the system of Prague integrated transport (PID). These carriers operate approximately 150 urban lines in the territory of Prague and ca. 225 suburban lines in its surroundings. However, thanks to the unified standards of a quality, a passenger should not tell a difference between them – the unified minimal quality level should be provided on all lines of the same type. And just it defines a newly approved document that will be binding for all carriers connected in the system of PID not later than the beginning of 2020. 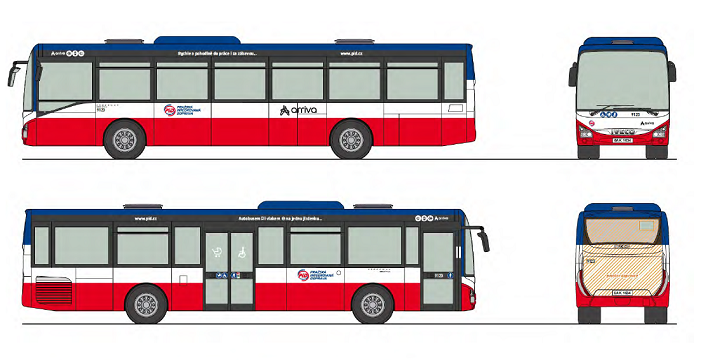 In the following 10 years, it will be necessary to replace up to 3000 buses with the new ones. All newly purchased buses will have to be at least partially low-floor, they will be equipped with the air conditioner, the modern information and fare control system enabling to obtain all necessary information in real time and to purchase a ticket for cash or by a payment card. But a priority is also an arrangement of an interior – as many seats as possible on the suburban lines, whereas enough space for the baby carriages and wheelchairs for disabled persons on the urban lines. The new buses will be also equipped with modern technologies that enable to monitor a movement of the vehicle in real time, to prefer the buses at a traffic light crossroads or for example to find out a current occupancy rate of the vehicle. Also, the system of inspections and evaluation of the particular standards will be more sophisticated, from what we expect fewer faults, more helpful operating personnel or for example a greater cleanliness and more thorough maintenance of the vehicles.

The buses should not be older than 15 years, an average age of the vehicle fleet should not exceed 9 years and the carrier should continuously replace his fleet only with the new buses. With new rules, ROPID found inspiration in other regions of the Czech Republic and abroad, both consultations with the public and individual special groups of the passengers and with carriers or bus manufacturers preceded the preparation of the new standards. Although, the new standard does not say, what the drive would have the new buses. But currently several projects take place, which have a goal to put completely zero-emission buses into common operation, especially for the central part of Prague or its hilly suburbs. In general, already the replacement of the vehicles with the new ones, which comply with the current emission limits, contributes substantially to reducing the carbon footprint from the public transport.

The new standard also establishes the other conditions that will have to be fulfilled in newly concluded contracts or appendices of the existing contracts. For example, a condition and standard of stops, an operation of controlling or an ability to replace a potential outage in operation in a short time. Also fare control system goes through a transformation as a follow up to a currently solved project that enables a purchase of short-term and long-term tickets on various types of smart cards, on contactless payment cards or within the scope of mobile applications. Along with an oncoming end of current contracts with the carriers, a new version of the standards for other types of transport (railway, trams, underground and ferries) is also preparing. Just as with the buses also here, the goal is to improve the quality, reliability and attractiveness of the public transport, thus increasing competitiveness toward the individual transport, where the comfort and reliability play a main role in deciding of people, by what they go to work or to school.