The first phase of the refurbishment of Budapest’s metro line M3, Hungary’s busiest fixed-rail route has been in process over half a year, by suspended underground operations on the section between Lehel Square and Újpest Center. 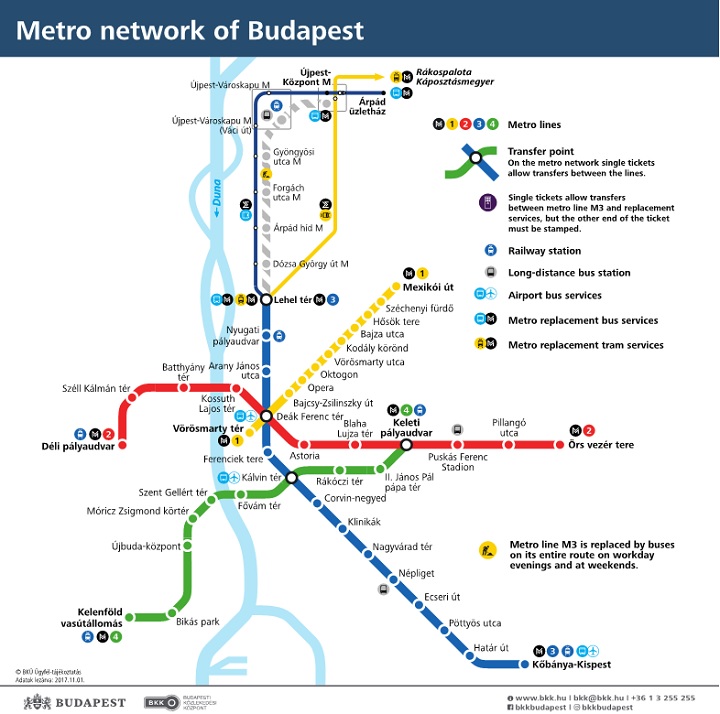 To ensure passenger flow, BKK Centre for Budapest Transport has created a multiple pillar-based surface replacement network for the multi-annual refurbishment of metro line M3. The basic pillar of the refurbishment works of metro line M3 is to put in service replacement buses providing services on the route of metro line M3. The 13,500 passengers/direction maximum traffic on the North section of line M3 could not be replaced by buses, as buses with 45 second headway are able to carry a total of approximately 8,000 passengers per direction. The transport organiser planned to make up for the missing capacity by operating alternative lines more frequently. Besides the routes covered by metro replacement lines, in the North Pest area, BKK has reinforced the fix-rail transport services bypassing the section closed by the metro. Instead of a set of two train cars, tramline 12 is running with a set of three train cars on weekdays marked with 12M as metro replacement trams on a longer route to Lehel Square served by metro line M3, while tramline 14 is running marked with 14M more frequently and with bigger capacity cars even at weekends. Owing to the reprogrammed traffic signals, trams’ timetable is decreased by two minutes between Lehel Square and Újpest Center. Transport fare system has been adjusted too : passengers are not required to validate a new single ticket when transferring between the metro line and the metro replacement tram.