The North/South line: a new metro line for the Amsterdam Region 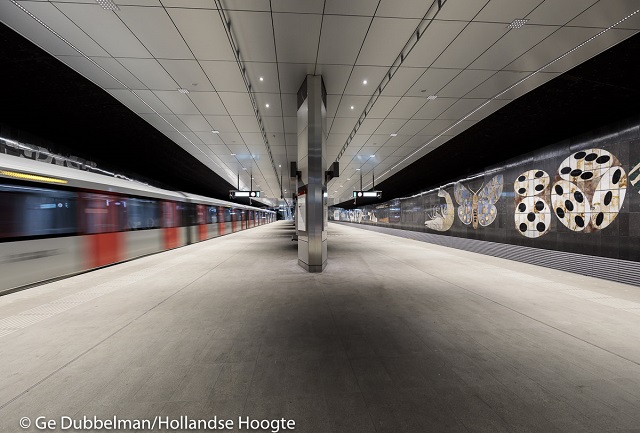 After 15 years of construction, the new North/South metro line will open in Amsterdam on July 22nd 2018. This new metro line will connect the northern part of Amsterdam with the southern part. Until now, the journey from north to south takes about 31 minutes, and requires a transfer at Amsterdam Central Station.

With the new North/South line, the journey time will be halved to 16 minutes, providing a direct connection. The line is expected to annually transport approximately 120.000 passengers quickly, safely and comfortably, directly underneath the old, dense and busy city center of Amsterdam, whilst also providing a good connection to the region.

Grounds for complete revision of public transport network July 22nd not only signifi es the start of the North/South line, but also the routes of many tram- and bus lines in the Amsterdam region will be modified. A survey in 2015, concerning the accessibility of Amsterdam, showed that the tram network was overloaded, whilst the metro network and the heavy rail network in and around Amsterdam were not being used to the best of its ability.

The new metro line will function as the backbone of the public transport system and will connect Amsterdam Central Station to the fast-growing Amsterdam South station. The east/west connections by bus and tram will be intensifi ed, making sure that also the railway stations Amsterdam Bijlmer, Amstel, Sloterdijk and Lelylaan will become better connected. Many employment is concentrated around these hubs, and passengers can also use these lines to transfer to the existing metro lines.

After this network revision the Vervoerregio and the operators Connexxion, EBS and GVB expect to be able to accommodate the continually growing passenger demand. At the same time the revised network offers the opportunity to moderate the budget cuts imposed by the national government, whilst maintaining a good quality of service, such as attractive journey times. Connections running in parallel between the North/South line and existing bus and tram lines will be minimized. As a result, the number of busses between the northern part of Amsterdam and Amsterdam Central Station will be reduced, because more passengers are expected to choose for a faster journey using the new metro line. And trams that used to run in a north/south direction will now be redeployed to strengthen the east/west connections.

The new and revised network will benefit most passengers, because they will arrive at their destination more quickly, even though some of them will have to transfer more often during their journey. To facilitate this transfer, the infrastructure has been modified and improved at several key transit points in the city.

Informing the passengers The start of the North/South line and the other network modifications encompass the largest change of the public transport network in Amsterdam since the introduction of the horse-drawn tramway in 1875. The parties involved (Vervoerregio, the three operators and the 15 regional municipalities) have chosen to conduct one major, collective, regional information campaign, in which a comprehensive and focused information flow will inform both commuters and local inhabitants.

Besides the use of more traditional informational and promotional resources such as newspaper-adds, advertising posters and notices in public transport vehicles and at stops, a major online campaign was also initiated. Using social media, the focus of attention was directed mainly at the website wijnemenjemee.nl (“we will take you there”), which contains information about the completion of the new North/south metro line as well as information about the changes in the public transport network from July 22nd.

A total of 14.5 million online adds were published on 3.1 million unique devices, which translates in an estimated reach of around 1 million individual users. This means approximately 2 out of 3 inhabitants of the Vervoerregio Amsterdam were reached.

Come and experience the North/Southline and the revised network Since construction has been completed, the operations having been extensively tested, and passengers being informed, we are now eagerly awaiting the official opening of the North/South line on Saturday morning, July 21st. You are cordially invited to visit Amsterdam and board the new metro from July 22nd to experience not only this splendid piece of Dutch engineering but all modifications made in the transport Amsterdam region transport system for yourself!

If not before, attending the next EMTA general meeting in Amsterdam from 7-9 November will give you another good opportunity.