The next phase in Midland Metro Alliance’s £149m work to expand the tram network in the West Midlands got underway on Tuesday 5 September when the MMA moved one of Birmingham’s most iconic sculptures – Iron: Man – out of Victoria Square.

The Mayor of the West Midlands, Andy Street, joined onlookers as two cranes raised the six ton metal sculpture out of the ground revealing his feet for the first time since 1993. 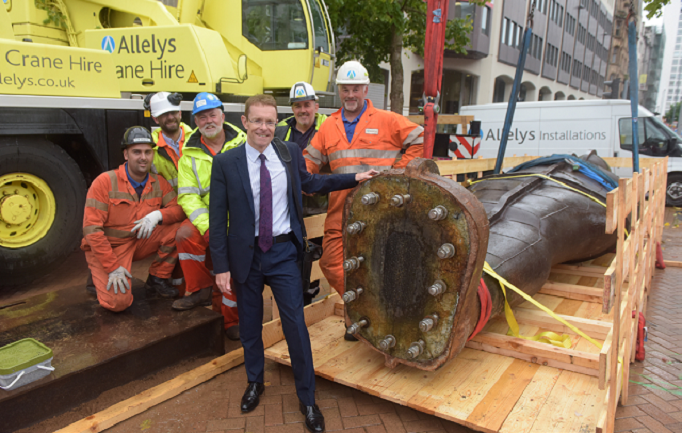 Mayor of the West Midlands, Andy Street, joining the team assisting in the removal of the city’s iconic Iron Man, which marked the kick-off of tram extension works in Birmingham.

Iron: Man was the second piece of public art to be moved by the Midland Metro Alliance during the summer, with the golden Boulton, Watt and Murdoch sculpture raised out of Centenary Square on Wednesday 23 August as worked progressed along Broad Street, home to the city’s famous nightlife. Both will be assessed by conservation specialists and put into storage by Birmingham Museums Trust. The statues are due to return to the city’s streets in 2018.

The sculpture removals mark the beginning of the extension to the westside of Birmingham, which will see trams run from New Street Station, through Victoria Square and a redeveloped Paradise Circus, past Centenary Square, along Broad Street and to Five Ways before stopping in Hagley Road, Edgbaston. This project is part of Midland Metro Alliance’s tenyear tram expansion programme, which includes new routes through Birmingham, Solihull, Wolverhampton, Dudley and Sandwell. The work in the city is getting underway shortly after the announcement from the government that they will provide nearly £60 million towards the cost of the programme.

Later on 5 September, the Mayor visited the Midland Metro Alliance’s new offices in Alpha Tower to thank the team for the work already completed and share his thoughts on why the tram is at the heart of his transport plans for the region.

In a question and answer session, Andy said: “Extending the Metro through the city centre to New Street station has already proved a tremendous success. People like the trams and want more of them. That’s why we will be tripling the size of the network over the coming decade so our towns and cities are better connected to each other. This will help create a transport network that can underpin economic growth and jobs and bring greater prosperity for everyone in the West Midlands.”

Alejandro Moreno, Director of the Midland Metro Alliance, added: “Andy Street has already been a great supporter of us since his election victory in the spring. We’re very eager to show that his faith in us was wellplaced and deliver our projects on-time and within budget.”

The Midland Metro Alliance’s westside tram extensions are due to open in two phases; firstly to Centenary Square in 2019/2020 and to Edgbaston in 2021. More information on further projects being completed by the MMA can be found by visiting www.metroalliance.co.uk or you can get in touch with the team by emailing us 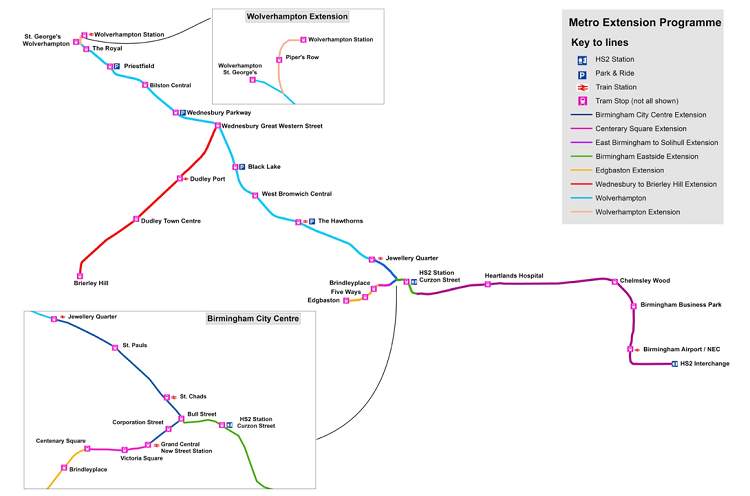