Preliminary study to connect both tramways networks in Barcelona

In March 2016, the Generalitat de Catalunya – Catalonia’s regional government – and Barcelona City Hall, signed a collaboration protocol to start a study on the feasibility of interlinking the two existing tramway networks and make it into one unified network. The 4 to 4,6 km-long connection includes 5 to 6 stops depending on the different alternatives, and is a strategic operation to enlarge the benefits for the metropolitan’s public transport capacity. The unification of the two existing branches is a spearhead of the Public Transportation Infrastructure Plan of 2011-2020, and it combines with the new orthogonal bus network already implemented in Barcelona. 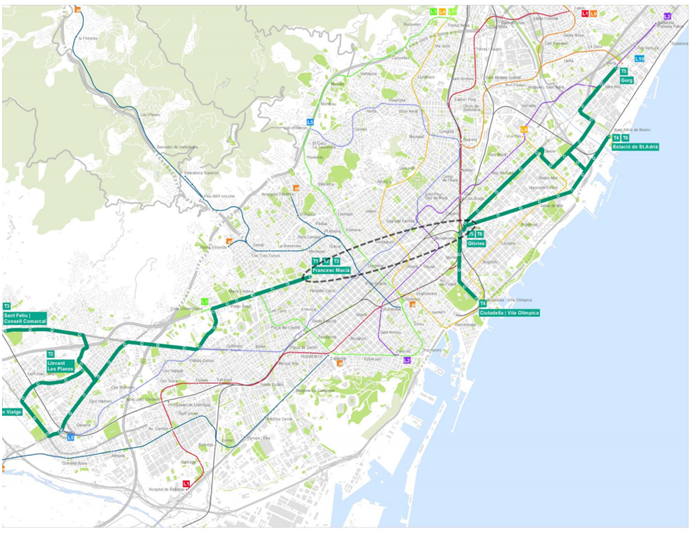 The two networks that came into service between 1997 and 2004, have identical technical characteristics, and include 6 (3+3) tram lines, 29,2 km of railway (sharing common sections in both networks) and a total of 56 stations. In 2016 it served 26,8 million passengers, its highest demand since it came into service. The project proposes linking both networks via a central section without catenary, as it harbours many buildings of great architectural value.

The Preliminary Study, passed in June 2017, analyses four connection alternatives for which by a Cost-Benefit Analysis was made.

Route alternatives 1, 2 and 4 have a similar route, through the Diagonal Avenue, while the third alternative analyses a different route through the Eixample district. In all cases, a dedicated tramway is projected, segregating public transport from private cars, although in some points the bus and the tram share the bus-tramway. In alternatives 1, 2 and 4 there are 2 lanes taken out of a total 6 on the Avenida for private vehicles, while alternative 3 goes through a street that shall be transformed into a traffic calming zone. 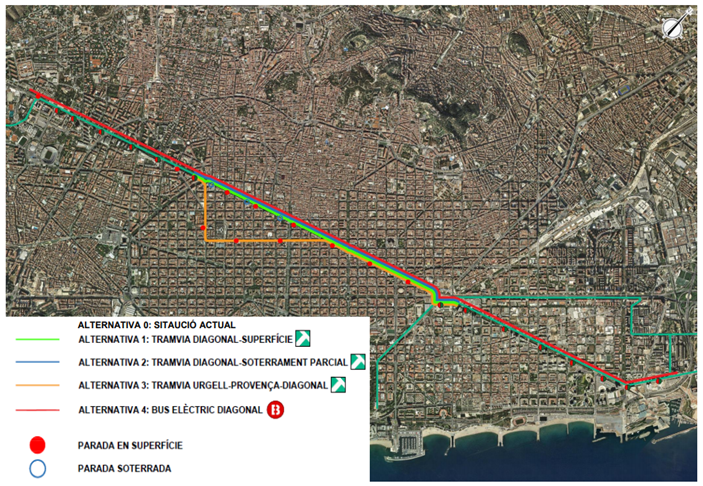 Means of transport: Alternatives 1, 2 and 3 propose the tramway, while the 4th analyses is based on operation by electrical buses.

The main issues that have been taken into account when defining the alternatives have been: customer satisfaction, as with the connection the daily demand will double (from 105,000 to 227,000); the minimum level of service, proposing a frequency interval of 4 minutes using double units (with a capacity for 440 users); the mid-run and long-run evolution of the network; and technical constraints such as the presence of single-track sections, restrictions in traffic light cycles and limited space in the station of Glòries.

Alternative 1 (figure below), on surface during the whole connection, would have positive social, economic and environmental impacts, which would yield a good social return, given that its IRR (9,9%) is vastly superior to its discount rate. This option is valued at 8,91 out of 10, and is hence considered to be the best of the alternatives. 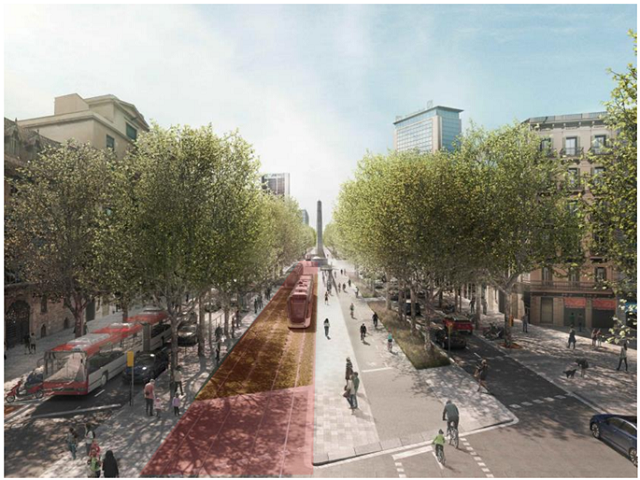 Alternative 2, including a tunnel across the most congested section, would yield positive socioeconomic impacts, although less so than Alternative 1, as its IRR [1] (3,4%) is a mere 4 decimals above the discount rate. Its NPV [2] is also low given it’s a considerable initial investment, twice that of Alternative 1. The higher investment would not be compensated by its higher demand nor by higher time savings. Its greater impact on the local environment during construction must also be recognized as a negative aspect.

The other two alternatives yield negative returns. Alternative 3, longer than Alternative 1, would have higher investment, maintenance and operational costs, and would also require to maintain some of the bus lines that Alternative 1 would remove. As for Alternative 4 (electric buses), it would imply one fourth (25%) of the cost, but its demand would also be significantly lower. Also, the forced transfers from bus to tram at the end of the line penalise demand.

The following table shows the main results for each alternative:

At present, the document is in a period of public information. Politicians, the public and social entities can present allegations to the document and thus choose the alternative which fits best to Barcelona’s needs, considering technical, social, environmental, urban integrity and mobility aspects while remaining compliant with the urban mobility plan.