On 29 December 2016, the Valencia Generalitat (Regional Government) passed the law that regulates the creation of the Metropolitan Transport Authority of Valencia. This entity will function as an autonomous agency to carry out the legal responsabilities on the management of all public transport services of the Generalitat, acting on behalf those municipalities that will transfer their responsibilities on urban transport to the Generalitat.

The establishment of this new authority is a process that started on 16 November 2015, when the Regional Ministry on Housing, Public Works and Territory Structuring pushed an institutional statement recognizing the need to create a unique transport authority for the Valencia metropolitan area. The objective is to manage the public transport system in the area, and to offer a higher quality service in transport provision to the citizens in the region.

This statement leads to the installation of two committees, one on institutional and one on technical matters, to manage the creation of the transport authority. These committees have steered the creation process of this agency.

The scope of the new transport authority encompasses the metropolitan area of Valencia, which includes 60 municipalities with a population of 1,797,346 inhabitants, of which 44% of them live in the city of Valencia (790,201 inhabitants), along an area of 1,475 km2.

The coordination with other public administrations on transport infrastructure investment, land use and the traffic management, or any other commitment which is assigned into its Regulation also pertains to the new legal entity.

The new transport authority agency will be governed by an Administrative Board, supervised by an Executive Committee and run by a General Manager. The approval of the regulation that shapes the new transport authority, where all its tasks and activities including those of the mentioned governing bodies are encompassed, is now scheduled for approval.

At present, some statutory provisions of the Regulation are reviewed by official institutions from the Valencian Generalitat, prior to its approval by the Council of the Regional Government. This is expected to be absolved before the summer. Once the statutes are endorsed, the Administrative Board will set a date for the first official convention. Thereafter the new transport authority will be launched and on its way. 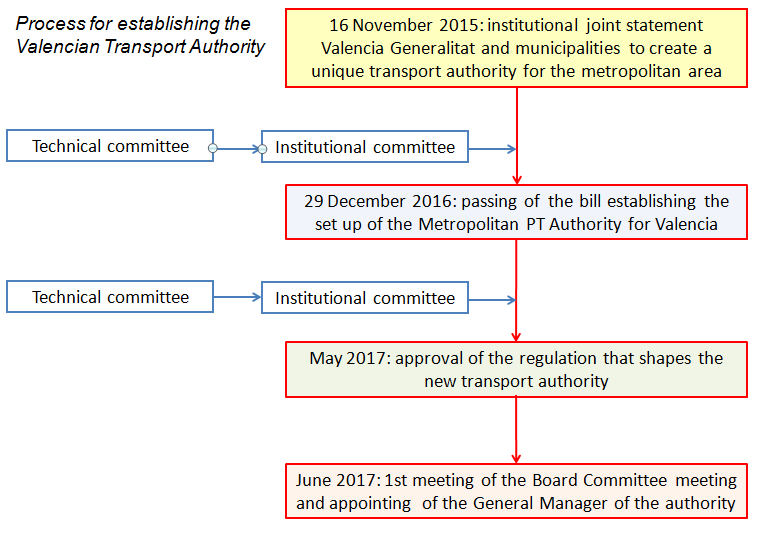