A few months from a new regional transit authority in Montréal

Within a few months, the entire public transit scene in Montréal region will be transformed. A new governance model will be put into effect on June 1st, 2017. Two new organizations will be created: the regional transit authority responsible of administering service contracts for the entire region and an entity in charge of operating the metropolitan transit network that includes the commuter rail network and bus services in the outer suburbs of Montréal.

The new model clarifies the role of each level of governance. At the political level, the Communauté Métropolitaine de Montréal (CMM) will be responsible to establish the orientations of the region, to approve capital program and strategic plan on transit development as well as policies regarding transit funding. At the strategic level, the regional transit authority plans, finances and organizes transit services which will be delivered by the operators under contract. More specifically, it will be responsible to produce a strategic plan on transit development and an integrated fare framework; to establish the objectives and service standards in the contracts with the operators; to ensure integration of all the transit services and to provide funding to regular transit and paratransit. Its role will not be limited to traditional transit modes.

The Authority will also in charge to develop carpooling and active transportation, to propose standards regarding the management of metropolitan arterial network, meaning that the region would finally have an authority that can act on multiple transport modes and propose integrated mobility solution. The board of directors will consist of a majority of independent experts. At the operational level, the Société de transport de Montréal (STM), Réseau de transport de Longueuil (RTL), Société de transport de Laval (STL) and the new entity Réseau de transport métropolitan (RTM) will be responsible to deliver the services, construct and maintain equipment and infrastructure.

Proposed governance model for public transit in the region of Montréal

Currently, there are 16 transit organizations responsible to plan and provide fixed-route services, 13 organizations responsible for paratransit within the 83 municipalities within the territory of the CMM. The high number of actors involved renders service planning, integration and operation inefficient. The three main objectives of the reform are to simplify the governance structure by reducing the number of parties from sixteen to five; to ensure a coherent service planning in the entire Montréal region by means of the new regional transit Authority; to provide accessible, reliable and efficient services via the four operators. Preparation works for the reform have been years in the making and the retained model is inspired by the best practice in the Canada as well as in the rest of the world. Public transit users and the general public at large are at the heart of the reform as the latter aims to improve mobility of the citizens in the region and to facilitate the use of public transit.

A lot of works are currently underway to ensure a smooth transition. Soon after the Bill 76 entitled “An Act to modify mainly the organization and governance of shared transportation in the Montréal metropolitan area” has been sanctioned on May 20, 2016, a 5-member Transitioning Committee has been formed. It has the responsibility to formulate the competency profile of the independent members in the boards of direction of the Authority and the RTM; to integrate the employees of the current organization into the new organizations; to draft the funding policy of the Authority, particularly the terms and conditions of the first contract with the operators; to prepare the first budgets of the Authority and the RTM and to handle the transfer of assets and liabilities among organizations. In the field, many employees from various organizations, solicited by their expertise, are working with the Transitioning Committee on these topics as well as other pressing issues such as transit network integration and the fare level of 2017. All the parties involved work vigilantly together to ensure that the reform would beneficial to the general public and the transition would be carried out as seamlessly as possible. One of the first mandates of the Authority would be to revise the fare structure. The recently completed strategic reflection on fare structure (see the other article) in the Montréal region would provide a solid foundation to work on. 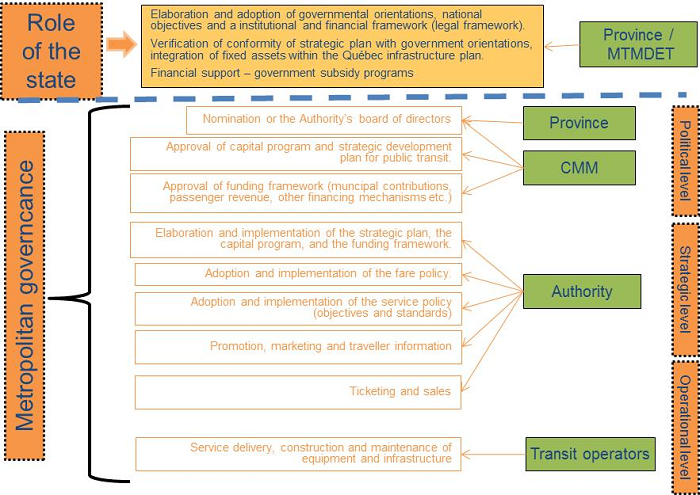 Roles and responsibilities under the new governance framework