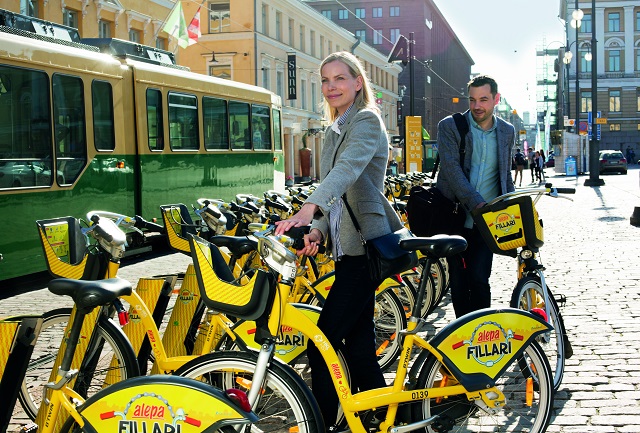 City bikes were rolled out in the streets of Helsinki in May and they immediately gained huge popularity.

This year, there were 500 bikes at 49 bike stations. Next year the number of bikes will increase to 1,500 and that of stations to 150. City bikes are shared-use bikes available for people moving around the Helsinki city center. They are part of the public transport trip chain and promote sustainable mobility.

The first city bike season surpassed all expectations. Between May and October, residents and visitors took over 400,000 rides, pedaling over 700,000 kilometers. The use rate of the bikes was high: each bike was used five to six times a day. Customers can register as users in advance at hsl.fi/citybikes. In addition, during the first season, five bike stations had payment terminals allowing customers to register on the spot. During the first season, over 10,000 riders registered for the whole season. Nearly another 10,000 people registered for one day and over 2,000 for a week. All passes – day, week and whole season – cover up to 30 minutes of free bike use at a time. If the time is exceeded, the user is charged a small extra fee for every additional 30 minutes. Users can ride the bikes up to five hours at a time. The time limits are intended to encourage short-term use of the bikes to make them available to as many people as possible.

Helsinki City Transport HKL, which operates Metro and tram services, is responsible for the procurement of the city bike system. The procurement agreement is for 10 years. The supplier is a consortium formed by Smoove, Moventia and Clear Channel. Smoove and Moventia established CityBike Finland Oy to maintain the service. Sales of advertising space is at the responsibility of Clear Channel and for the first three years, the main partner in cooperation is the Finnish retail co-op HOK Elanto. The sales of advertising space covers about half of the costs of the system. Helsinki Region Transport HSL is responsible for the city bike website available at www.hsl.fi/citybikes, for the Travel Card functionality, the city bike functionalities at the http/beta.reittiopas.fi, as well as for the marketing of the service.

The registration fee for the whole season has been 25 euros, for a week 10 euros and for a day 5 euros. HKL collected over 400,000 euros in registration fees and user charges during the first season. HKL’s Board of Directors will set the fees for the next season during the winter.

During the summer, HKL conducted a customer survey according to which the city bikes are part of residents’ daily travel, making everyday journeys easier and faster. Most people said they use the bikes for leisure journeys, over 50 per cent also for commutes. A total of 60 per cent of the users regularly combine city bikes with public transport. Most of the users say they ride city bikes one to five times a week. Most people gave the different parts of the city bike service a grade of four on a scale of one to five.

In 2017, the number of city bike stations and bikes will triple, making the service available for an increasing number of users. The expansion of the bike system will also improve the service level and accessibility of public transport.

The city bike project has had a few hiccups along the way, but the City of Helsinki has shown a strong commitment to making the bikes available. In addition, the project has shown how close cooperation between various actors can result in common good benefiting residents and all people moving about the city. Walking, cycling and public transport are the best ways to travel in a city.