CIPTEC-project at its halfway mark. A progress report on the first 18 months of work.

CIPTEC (Collective Innovation for Public Transport in European Cities) is an EU Horizon 2020 project, addressing the challenge for “Smart, Green and Integrated Transport” and a CIVITAS knowledge generating project in the area of “Tackling urban congestion”. The main aim of the project is to bring new thinking and innovative solutions for Public Transport, creating a favourable environment for the growth of Public Transport. The project started in May 2015 and will run for 36 months.

The project has successfully reached the halfway mark. The activities of the first phase have ended. In detail an analysis of current market and social trends, concerning not only the Public Transport systems, but also from other business sectors, has been completed. Since global market trends play an important role in the way targeted customer groups behave, this represents an essential part of the research. During this phase, CIPTEC investigated the specific needs of users and potential users of Public Transport systems in order to identify their needs and requirements from urban Public Transport services.

Another important research absolved in the beginning of 2016 was the mapping and profiling of urban public transport supply. With the aid of an extensive survey needs of authorities in EMTA were mapped, aiming at identifying differences and gaps between needs of supply and needs from demand in the Public Transport sector. The first phase ended with the recording and evaluation of existing innovative services, not only from the Public Transport sector, but also from other transport and business sectors.

Simultaneously, CIPTEC entered its second phase, exploring the ‘unknown’ by co-creation of new emerging ideas that might trigger new solutions in the field of urban transport by using the bottom-up approach. The main goal of this phase is to develop innovative concepts in the Public Transport sector by means of collective intelligence. Therefore, new, innovative solutions are suggested and evaluated through collective intelligence methods, such as crowdsourcing campaigns and co-creation workshops.

Specifically, one crowdsourcing campaign and two co-creation workshops will take place in each one of the following cities: Thessaloniki, Frankfurt, Southern Tuscany, and Rotterdam, while a wider crowdsourcing campaign has already been launched at a European level. The main aim of these actions is the collection of proposals and the designing of new innovative ideas, practices, business models, etc. for the public transport sector. In fact, European citizens can share their concerns about the future of Public Transport and can submit their innovative ideas.

A crowdsourcing platform was developed and demonstrated in the general meeting in Budapest by our partner Tero, to investigate new and innovative ideas that could advance the quality, effectiveness and attractiveness of the Public Transport. Five versions of the user-friendly platform are accessible to this website, where citizens from all the European countries could submit their ideas in order to improve the level of service of public transport systems, both in their urban area and in Europe as a whole. The wide crowdsourcing campaign at EU level is in English language, while the other four campaigns at local site level are in national languages. The submitted ideas will be disseminated, discussed, improved and evaluated by the other users of the platform. The best idea, which will arise from the evaluation of the users, as well as from a special committee on the field of transport, will be rewarded.

The crowdsourcing actions are addressed to all users and non-users of public transport and aim at the interaction and the enhancement of cooperation and communication among citizens in order to accomplish the improvement of the public transport system as common goal. The successful implementation of the actions in terms of the participation level and the quality of submitted ideas/proposals will be influenced by the incentives provided to the participants. Beyond the motivation derived from the participation, dialogue and joy of collaborative creation themselves, it is expected that some attractive gifts could encourage citizens to participate in this original ‘social experiment’. Therefore, CIPTEC project opens a call for potential sponsoring for the European level Crowdsourcing campaign.

Co-creation workshops in four main European cities (Frankfurt, South Tuscany, Thessaloniki and Rotterdam area) are launched and are being implemented with the aim to collect more innovative ideas for the improvement of Public Transport and for the increase of its market share. This phase will be completed with an experimental analysis of generated innovations.

At this time a survey on promising and innovative implementations, concepts and services that could reshape the passengers travel experience by Public Transport in European cities is in progress and available at the following link.

In particular, people around the Europe are asked to co-design with CIPTEC project partners the future of the Public Transport sector and thereby improve the quality of life in cities.

The 3rd CIPTEC project meeting was organized by EMTA as CIPTEC project partner with the support of BKK in Budapest last May. During the months to follow this event has sparked plenty of interesting, fruitful and motivating actions within the CIPTEC project. CIPTEC partners have organized and participated in a number of events, where the project, its objectives and actions were greatly promoted. These events covered a wide range of topics, such as consumer behavior and behavioral engineering research, mobility management, Sustainable Urban Mobility Plans etc. 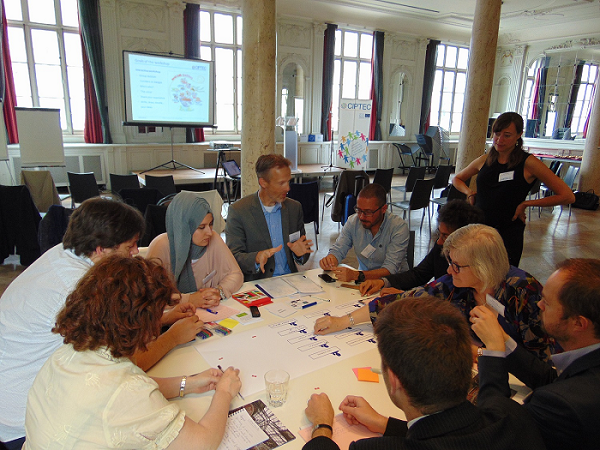 CIPTEC project partners had an active participation at EU Mobility Week 2016 events, where people became familiar with the CIPTEC project. CIPTEC, as part of the CIVITAS knowledge generating research projects ‘family’, participated actively in multiple ways in the last CIVITAS FORUM Conference, held in Gdynia from 28-30 September. Hundreds of CIVITAS stakeholders, from cities, consultancies, industry and research sector from all around Europe, gathered in Gdynia for three days in order to ‘shape the mobility of tomorrow’.

All public CIPTEC project’s deliverables are available online for downloading at the following link.

For more information about CIPTEC project, please find the second newsletter of CIPTEC following this link

You could also subscribe for the CIPTEC newsletter on this page.