The Air Quality Board for the Conurbation of Barcelona

The Air Quality Board for the conurbation of Barcelona is a local participation body, under the leadership of the Government of Catalonia, devised as a territorial space for information, participation and consultation in the sphere of atmospheric pollution, and for the sharing and pooling of the actions of all the represented parties. The Board is made up of 70 institutions, administrations and citizens’ entities that, through their technical know-how, due to the nature of their activity or as a result of the overall interest in the quality of air may consider themselves to be affected.

Main goals of the board are:

At the present time the Generalitat is putting together its Work Plan 2016-2018, aimed at reducing the level of pollution in the 40 municipalities in which special environmental protection of the atmosphere has been declared. The Generalitat and local councils, along with supra-municipal bodies, are all working jointly with the goal of ensuring a reduction of between 25 and 30% of the vehicles currently circulating in Barcelona’s urban areas and the conurbation as a whole. 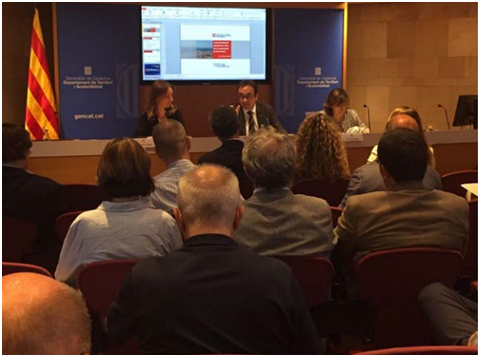 In order to reach these objectives, 3 working groups have been set up to define the best proposals and the most effective solutions with regard to: reducing situations of traffic congestion; the environmentalisation of goods transport, urban distribution and, in particular, the area of logistics known as the “the last mile”; and finally, the establishing of the criteria for the delimitation and operation of the so-called ZUAP’s (Urban Zones of Protected Atmosphere).

Collaboration with the European Union:

The Generalitat of Catalonia is working jointly with other European regions, such as Greater London, Baden-Württemberg, North Rhine-Westphalia, Flanders or Venice, to coordinate actions in such a way that both local and regional governments can have an impact on the definition of the European Union’s environmental policies, while also sharing examples of best practices related to air quality improvements. Catalonia is a member of the AIR (Air Quality Initiative of Regions) network, which consists of 13 regions in 7 European Union member countries, representing 22% of GDP and 18% of the population (around 88 million inhabitants), and was involved in its creation, back in 2011. The network includes many of the most highly industrialised and densely populated areas of the 7 states, such as Milan, Turin, Bologna, Rotterdam, Amsterdam, Frankfurt, Stuttgart, Colone, London and Barcelona.