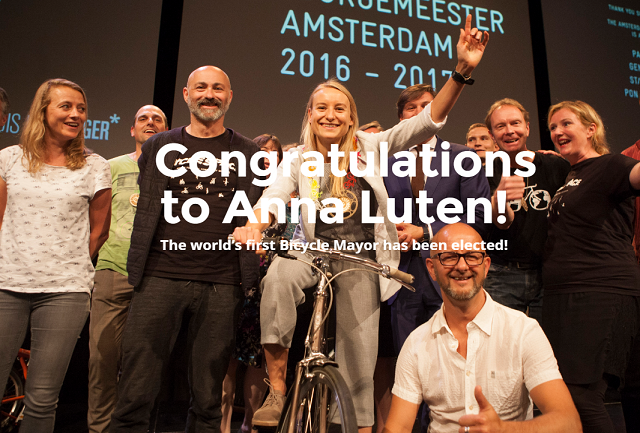 As of Friday June 24 Amsterdam has its own cycling mayor. Ms Anna Luten had the honour to receive out of the hands of the Amsterdam City Region councillor for public transport and city councilor Pieter Litjens the chain for the cycling mayorship. A world first on the initiative of Cyclespace, the joint venture that has won earlier this year the tender of Stadsregio Amsterdam and the Amsterdam municipality for founding a “Cycle Lab”.

Exchange of cycling know how

Cyclespace receives many foreign visitors and representations from all over the world that call on the Stadsregio or municipality’s front door to learn and collect information about cycling and make bicycle tours in and around the city of Amsterdam. The organization aims to innovate and build capacity on all concepts and relevant know how regarding cycling. A cycling mayor is one of those concepts. Anna Luten has to voice the interests and wishes of the cyclists in and around City Hall and is supposed to act as intermediary between the city local and regional administration and the cyclists in Amsterdam and the Amsterdam urban region. One of her goals is to recover Amsterdam’s leading position as the global cycling capital. 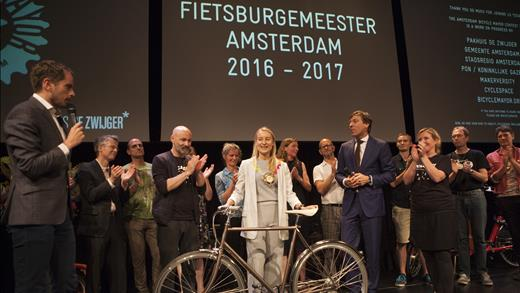 Cyclespace hopes that other cities will soon follow up on that example by appointing a cycling mayor as well. Moreover, also abroad cycling is taking of and everywhere the cyclist’s stakes should be advocated.