Pay for what you use

As of April 2016, the RMV is the first public transport association in Germany to try out an innovative kilometre-based fare system in a large-scale pilot. 20,000 test users of the new fare model RMVsmart are no longer paying the rate for an entire fare zone but only for the trip they actually take. The new fare is initially being sold via smartphone.

The Rhein-Main-Verkehrsverbund (RMV) connects the international finance and mobility city of Frankfurt am Main with the regional capitals Wiesbaden and Mainz as well as with medi-um-sized polycentric cities Marburg and Darmstadt and also rural areas such as the Odenwald and the Rhön Mountains (2.5 million passengers per day). In order to make allow-ance for the wide variety of transportation links when the RMV was founded in 1995, it was decided to create large-area fare zones based on the municipal and district boundaries.

Since that time, these patterns of mobility have changed considerably. Nowadays passengers use public transportation to meet a much wider range of mobility needs and cover longer distances beyond municipal and district boundaries. A typical public and political criticism is that connections between directly neighbouring towns and stations attract over-priced fares when a fare boundary is crossed on a short trip. This problem demonstrates the weaknesses of the zone-based fare system today – a challenge felt not just by the RMV but throughout Germany.

A step-by-step reform has now been underway for five years to improve the RMV fare struc-ture: First Fares for different target groups (school students, trainees, university students and old-age pensioners), later differentiated fare levels for the different sized towns and cities. At the present stage, the most complex issue of all is being addressed: developing the fare sys-tem to include single and day tickets for use throughout the region on an occasional basis.

The challenge here lies in the fact that even slight changes in the percentage of ticket sales have an immediate and quite substantial impact on the transportation company’s revenue.

The new fare model is initially being tested on smartphones: in this way, existing technology allows complex fare calculation structures to be applied while still ensuring that the system is very easy for customers to use.


Fares that reflect actual use of the transportation system

The RMV has developed the prototype of a distance-based smart fare based on the kilome-tres travelled and the means of transportation selected. In the same way as when taking a taxi or using car sharing services, RMVsmart means that passengers only pay for what they actually use, so the amount charged for the ticket reflects the real distance travelled.

The fare is made up of a small number of clearly structured components. Each component attracts a fixed basic rate of EUR 1.69 per trip. Passengers pay a distance-related charge for trips on regional trains, rapid transit trains (S-Bahn) and underground trains: within the close-knit and frequently served core network of greater Frankfurt this is 21.8 cents/km while in the remainder of the RMV area (regional network) it is 10.9 cents/km. An individual fare is calcu-lated for each trip passengers take using these means of transport. For bus and tram rides there are clearly structured flat-rate fares depending on the size of the towns or villages served.

RMVsmart: Direct comparison of kilometre-based fare prices with other modes of transport

These new fare components are only intended as background information: When the trans-portation route is selected and a ticket is purchased, the smartphone app automatically cal-culates the specific fare. Therefor the successful RMV-Handyticket-App was enhanced (1.5 million downloads, 500,000 routing requests per day). 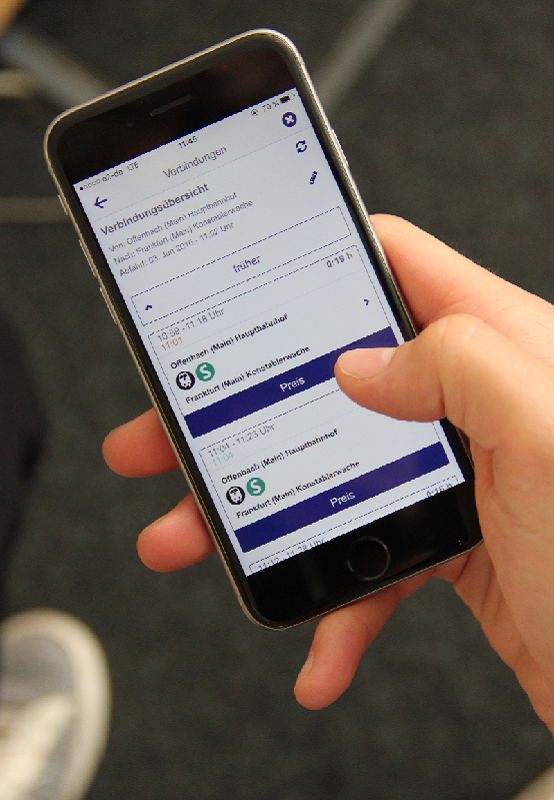 The RMVsmart ticket prices have been very carefully calibrated: they are geared towards existing fare revenue so that, on average, fares and earnings remain the same as compared to the previous fare system as applicable to occasional use of the transportation system.

In order to subject the new fare system to intense testing for acceptance, functionality and profitability, RMVsmart will be piloted for a period of three years among a limited group of users across the entire RMV region. The RMV is the first public transportation company in Germany to carry out a project like this on such a large scale.

For the first time, the RMVsmart pilot project allows innovative new discount and incentive systems to undergo real-life testing in a public transportation system, including impact analy-sis. To start with, every user is given a 10 per cent discount per calendar month if they spend EUR 20 or more on tickets in the month in question. Additional incentives are planned for frequent users. These might include kilometre-based models, allowing the system to be transferred from the occasional user to the season-ticket customer. This opens up the possi-bility of an entirely new fare system, providing it is accepted by passengers. 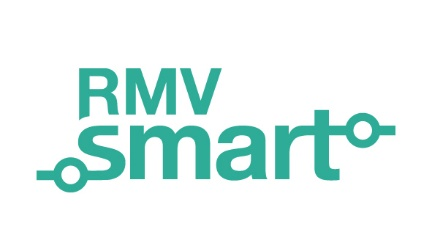 Since the innovation is so fundamental, the RMV is keen to involve the very people for whom the fares are designed: the passengers themselves. The field test is being accompanied by an innovation dialogue where test users, experts, association representatives and politicians are all called upon to scrutinize the prototype fare system – through surveys, online debates and discussion events. So RMVsmart is being developed for market readiness on a collaborative basis, paving the way for a decision to be made regarding potential introduction to a wider-ranging route network. The test phase and dialogue process are already generating groundbreaking insights in terms of advancing the development of public transportation fares.