The Barik contactless: topping up your card by an app on your smartphone

The possibility of topping up Biscay’s contactless card, Barik, using smartphones was launched on 29 February 2016. The Biscay Transport Consortium (CTB) activated an app on Google PlayStore, Barik NFC, which makes it possible for any Barik user to top up their card, as many times as they want, anywhere and at any time in the day.

After a pilot group of people comprising 740 users successfully tested an experimental application for more than six months (since mid July 2015), the CTB launched it to the market, incorporating some improvements suggested by this group of users.

The CTB’s application makes it possible to top up transport tickets online, using a smartphone with NFC (Near Field Communication) activated and by paying the amount via a secure payment channel. Thus, the user, from any geographical location and without having to go to a fixed top-up point, can increase the balance of their card or purchase a transport ticket supported by the Barik. CTB’s application is a technological milestone in the Barik system that facilitates the use of public transport.

The project is part of CTB’s policy to progressively incorporate in Biscay the latest technological advances in the field of ticketing systems. Up until now it was possible to carry out the top-up operations at the usual physical locations of the Barik card (Metro Bilbao, Ferrocarriles Vascos, Bilbao Tram, Renfe -including Feve-, Funicular of Larreineta, Funicular of Artxanda, urban and inter-urban bus ticket offices (Bilbobus and Bizkaibus) and at newsagents, kiosks, commercial premises and ATMs), and since December on the website ctb.eus. 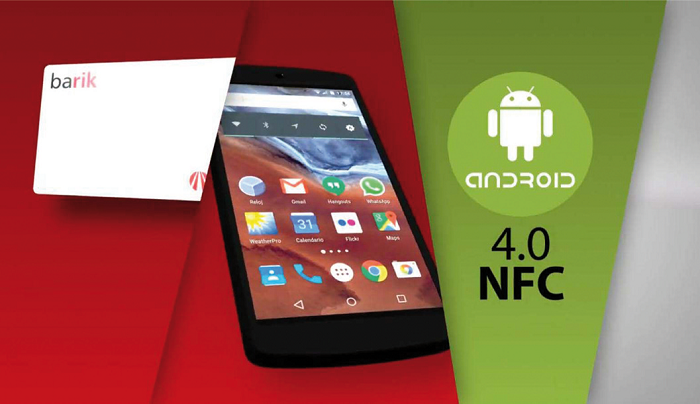 Right now, there are more than 1.4 million Barik cards in circulation and more than 800 top-up points distributed throughout Biscay.

The smartphone top-up application developed by the CTB consists of a mobile application for Android devices with NFC technology, which enables short-range and high-frequency wireless communication between devices; in this case, between the card and the mobile phone. The system also contemplates the section of cryptographic and authentication operations of Barik cards, that is, a secure payment channel and the appropriate applications that enable fully guaranteed transactions.

During its first three months of operation, the "Barik NFC" application by the Biscay Transport Consortium (CTB) has reached a total of 25,137 top ups. In addition, more than 18,000 users have already downloaded this free app which makes it possible to top up the Barik card using an Android smartphone. During this period there were 178,880 information requests.