The Hague surroundings within Metropolitan region Rotterdam – The Hague (MRDH) was at a turning point in 2009. After the launch of RandstadRail (combination of tram- and heavy rail network at the Zoetermeer – suburban town near The Hague - and Hofplein connection) proved an iconic success. As a next step in the upgrade of Randstadrail the current fleet of over 140 GTL8 trams needed to be renewed. A pivotal choice needed to be made between either transforming the network more like RandstadRail branding with wider trams or continuing the deployment of 2.35 m width of trams. As this was a choice to be made in a period of austerity, this was a mainly by politics colored debate.

Eventually the choice was made on wider (2.65 m) trams, that was supported by the following fundamental arguments and considerations : • The new tram needs to accommodate an increase of passengers based on forecasted growth. A larger tram was needed for this, because higher frequencies or more new links provided only a limited solution. The network is built up to ensure that all the lines provide for synchronized connections to the city center and the main stations in The Hague.

In total an investment program of € 350 million Euro was granted for the infrastructure and € 210 mln is reserved to order and procure new trams. The Network RandstadRail programme (short : NRR) was a combination of long term maintenance projects, more space for the tram, improved accessibility and a quality impulse for instance by the creation of a TOP-tram station at the main train stations. 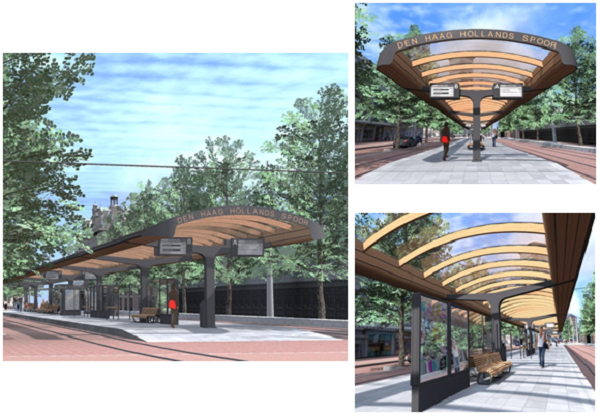 MRDH is convinced that an extra quality investment in stops will attract more people. Changing of transport modes is a fact in PT, so you have invest in the quality of the nodes to make the change as comfortable as possible. With Network RandstadRail MRDH invests in the nodes. The most important nodes in the network are called ‘TOP-halte’.

The governance (of the operation or sustainable renewal of the tram system) will be a cooperation between HTM (municipal Transport Operator), the 23 municipalities and the MRDH. HTM focused on ordering new trams and engineering the specific Rail infrastructure. The municipalities carry responsibility for engineering and building the local infrastructure and the MRDH on the financial coordination and the overall program control and monitoring. The specific challenge was to coordinate the large amount of projects spread out over the region. This overlapping with a lot of other projects (traffic and building) was a fact. The municipalities had a task coordinating this projects with the different interest per project.

Last autumn the first of the Siemens Avenio was presented on line 2. This year lines 11, 17, 9 and 15 will be taken in operation. Prominent experiences with the trams are :

With the renewal of its trams MRDH started an upgrade of the entire tram network in the region. The first of the 60 wider trams are operational and the last will be in operation beginning of 2017. Investments are not only aimed at purchasing the new trams, but also on a spin off to a total upgrade of the public space. Although a decision on a second phase of the fleet renewal for another 60 trams is ongoing, in the end the Metropolitan Region Rotterdam – The Hague will upgrade its tram network to be ready for accommodating further growth and finally will be fully set to facilitate the demands from the law on accessibility.

The success of RandstadRail shows that there is a need for large regional public transport systems that strengthen the metropolisation. From the traveler’s perspective improving the quality of the RandstadRail network in the coming years will remain highly noticeable.